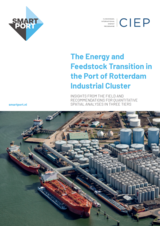 Activities in the Port of Rotterdam industrial cluster will change over the next twenty years as a result of the energy and feedstock transition. The Rotterdam-based Smartport knowledge platform is engaged in coordinating a research track assessing the spatial challenges which lay ahead.

CIEP was tasked with performing a preliminary analysis before additional research is carried out by other knowledge organizations. Companies’ views on the future of the HIC were collected, analysed and interpreted. Interviews with 34 high-level professionals of major companies active in the HIC were conducted by the CIEP researchers.

The interviews revealed that some companies foresee spatial limitations as being a key barrier to developing new projects in the years leading up to 2030, while a few others indicated that sufficient land is currently available to realise new developments on site. For the period beyond 2030, the general view is that the availability of land will be a larger concern. Demand for hectares in the HIC could be explored in three dimensions: the nature of the process of change, the future of international trade and markets, and the dominant technologies. Such a three-dimensional framework could be used for creating alternative transition scenarios for the HIC.

This study confirms that the energy and feedstock transition will lead to substantial changes in the Port of Rotterdam and its industrial cluster. ‘Business as usual’ is not anticipated by the companies. It is important to emphasize that this expectation far from guarantees the achievement of the desired degree of industrial renewal in the HIC. The widely shared view is that it is imperative to avoid ‘impracticable ambitions’ and to make sure that the political, regulatory and societal framework in the run-up to 2030 supports the transition ambitions.

External publications/articles, video's, and other communications by CIEP