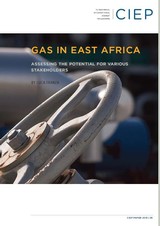 In 2010, Anadarko proudly announced to the world that it had discovered a giant gas reservoir in an impervious part of East Africa. Following further substantial findings, the region has emerged as one of the world’s most promising gas frontiers, with a potential reserve base of more than 5 Tcm.

Although the energy community is almost exclusively focusing on prospects for LNG production in East Africa, broader development options deserve a closer look. As a matter of fact, Mozambique and Tanzania rightfully perceive the recent gas discoveries to be a unique opportunity for their socio-economic development.

This paper provides a qualitative overview of both LNG and domestic monetization projects in East Africa, from power generation to fertilizers. After looking at the market environment of the various projects, the paper discusses their potential contribution to the local economies and the possible arrangements between acreage holders and governments. This approach reflects the growing awareness of some of the IOCs that using part of the gas domestically helps fostering political stability, thus creating a sound investment climate.

External publications/articles, video's, and other communications by CIEP